“Then I looked, and behold, a Lamb standing on Mount Zion, and with Him one hundred and forty-four thousand, having His Father’s name written on their foreheads.” (Revelation 14:1)

Scripture presents a unique group of people: the 144,000. This group receives very special honors in Heaven. The reason why the 144,000 receive special honor is explained:

“These are they which were not defiled with women; for they are virgins. These are they which follow the Lamb withersoever He goeth. These were redeemed from among men, being the firstfruits unto . . . [Yahuwah] and to the Lamb. And in their mouth was found no guile: for they are without fault before the throne of . . . [Yahuwah].” (Revelation 14:4, 5) 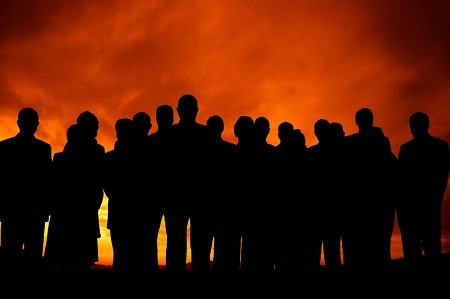 No other group of people, through all time, could be so described. Their experience is what sets the 144,000 apart as special. Through daily self-surrender to their Redeemer, the 144,000 have been purified and refined. Their characters have been molded and fashioned after the divine similitude and they perfectly reflect the divine image. They are one with the Father and the Son. Their thoughts, their likes and dislikes, their motives and goals are one with the divine. They are complete in Him.

The 144,000 are described as “virgins” because they have a pure faith. Satanic lies and false doctrines have been replaced in their hearts by the pure truths of Heaven. No guile flows from their mouths. Rather, their words, like those of the Saviour’s, are a savor of life unto life. Because of their full surrender to the will of Yahuwah, they are One with the divine mind and will. Therefore, it is their highest honor and privilege to “follow the Lamb withersoever He goeth” throughout the universe and for all eternity.

Following the Lamb does not begin in Heaven, however. In order to have the honor of following the Lamb in Heaven, they began following Him on earth. For nearly 6,000 years, the energies and resources of Heaven have been focused on bringing light and truth to souls perishing in ignorance and sin. While on earth, the 144,000 coöperated with Heaven in the salvation of souls. They shared Yahuwah’s love for sinners and put forth self-sacrificing efforts to bring the truth to others. 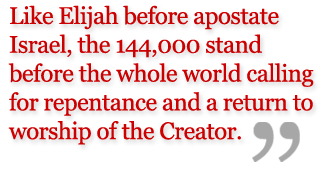 stood alone before king and commoner, calling for repentance and a return to the worship of the Creator. He presented life and death to the people, and urged them to choose life. This is the work of the 144,000. Scripture reveals the final struggle will be over when to worship, because when one worships reveals who is being worshipped. Like Elijah before apostate Israel, the 144,000 stand before the whole world calling for repentance and a return to worship of the Creator on His seventh-day Sabbath determined by the luni-solar calendar of Creation.

Their message swells into a loud cry, resounding from one end of the earth to the other:

“Fear . . . [Yahuwah] and give glory to Him, for the hour of His judgment has come; and worship Him who made heaven and earth, the sea and springs of water.” (Revelation 14:7)

As in the days of Elijah, this is an extremely unpopular message. The powers of earth will combine to stamp out all resistance to their worldwide tyranny. Under the symbol of a beast, Scripture declares of earthly powers at the last day:

In the face of almost universal opposition, the 144,000 raise their voice in warning:

“If anyone worships the beast and his image, and receives his mark on his forehead or on his hand, he . . . shall also drink of the wine of the wrath of . . . [Yahuwah], which is poured out full strength into the cup of His indignation.” (Revelation 14:9, 10)

The 144,000 share the Saviour’s love for souls. Regardless of the cost or danger to themselves, they join with Heaven in declaring earth’s final warning for the last generation. They are co-laborers with Yahushua in the salvation of souls and His reward will be theirs:

We are children of Yahuwah, and if children, then heirs of Yahuwah and joint heirs with Yahushua. (See Romans 8:17.)

Joint heirs with Yahushua! Children of the Heavenly King! What a reward for faithfulness! Yahushua, having redeemed the fallen race by overcoming on the very points where Adam fell, becomes the second Adam:

The 144,000, by full surrender of self, enter into a relationship with the Saviour more intimate than anyone else can share. As Yahushua is the Second Adam, they are the Second Eve, the bride of the Lamb. As the Spirit of Yahuwah moves on hearts to bring them to repentance, the 144,000 as the bride of the Lamb, join their voices with His, urging all to repentance and obedience.

Fully entering into the mind and will of Yahuwah, the 144,000 have put forth their best energies in working with the Saviour for the salvation of souls. Having been ONE with Him on earth, their relationship continues uninterrupted by death. They are the faithful that will be taken to Heaven without seeing death and the loving relationship begun on earth will continue throughout all eternity. The treasures of eternity are opened to all the redeemed, but the 144,000, as the bride, will share a special closeness with the Saviour. Their hearts, overflowing with love, joy and gratitude will find expression in song:

“They sang as it were a new song before the throne, . . . and no one could learn that song except the hundred and forty-four thousand who were redeemed from the earth.” (Revelation 14:3)

This song is the song of their experience; an experience such as no other company has ever had. They love much because they have been forgiven much and great will be their reward in Heaven. They have seen the earth destroyed by famine, pestilence and earthquake during the final outpouring of Yahuwah’s wrath in the seven last plagues, but they have proven the strength of the Saviour’s promise:

“I also will keep you from the hour of trial which shall come upon the whole world, to test those who dwell on the earth.” (Revelation 3:10)

They have been purified and refined in the furnace of affliction. Their characters, without one spot or stain of sin, now perfectly reflect the image of their Maker. Now, the honor is given them:

I will make him a pillar in the temple of My Elohim, and he shall go out no more. (See Revelation 3:12.)

This is not a restrictive command, dictating that the 144,000 will not be allowed to leave the immediate presence of Yahuwah. Rather, it is a statement of their privileged status: the 144,000 always have immediate access to the Father’s presence. With the redeemed of all ages, the 144,000 are given the right “to eat from the tree of life.” (Revelation 2:7) They receive their own “crown of life.” (Revelation 2:10) They are given “a white stone, and on the stone a new name written which no one knows except him who receives it.” (Revelation 2:17) This new name is a reflection of what their individual characters have become under the polishing and refining of the divine Purifier.

And as though all of that is not enough, the love and generosity of the Heavenly Bridegroom does not stop there. For the 144,000, His bride who has joined with her Beloved in working for the salvation of souls, there is yet one more reward, greater than all the rest:

“To him who overcomes I will grant to sit with Me on My throne, as I also overcame and sat down with My Father on His throne.” (Revelation 3:21) 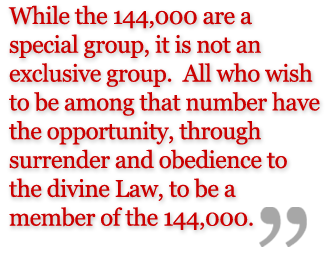 The destiny awaiting those who have followed the Saviour on earth is the honor and privilege of following Him forever in the courts above. While the 144,000 are a special group, it is not an exclusive group. All who wish to be among that number have the opportunity, through surrender and obedience to the divine Law, to be a member of the 144,000. This is not done through any “works” they perform. None who sing the song of Moses and the Lamb will claim to have gained Heaven by their own merits.

Scripture presents this close relationship between the Lamb and His bride by asking,

“Who is this coming up from the wilderness, leaning upon her beloved?” (Song of Solomon 8:5)

The 144,000 are the bride of Yahushua because they have surrendered their will to His; they have trusted all of the promises. They have become strong in His strength; His righteousness is theirs.

The voice of the Heavenly Bridegroom falls lovingly on the ears of the bride: