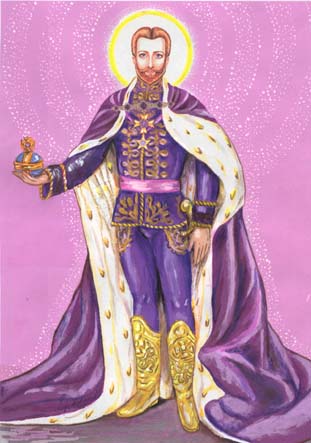 I am your Saint Germain, and I come at this time, just as I was planning on coming earlier.

Various effects have occurred, not only here with this group that you are in, but it is happening in many different places. But know that everything is becoming stronger as a result of it, even though it does not appear so.

That is what is happening: there is a push-pull that is playing right now across the planet. And those that are yet of the shadows, those that are yet of the darkness, are doing everything they can to fight the fight and hold on to what they believe is their right to hold on to control of the planet. But as all of you know, that is coming to an end, and must come to an end.

So, that is all, since we trust and know that everything is happening for a reason, and will continue to do so.

ONE WHO SERVES(Channeled by James McConnell)

And know what Saint Germain had said was quite difficult for this one to release enough here to allow for this office to feel the disconnect himself and to somewhat draw back from memory here in this time that he has gone through. And you know that these things must happen though, even though it seems like it is the end of all things when you’re going through it. It is not. It is making you stronger. Just as it has made this one we speak through now stronger.

We are quite happy to be back after some time not present here. It will take a little time to come back fully, but he will come back even stronger yet, especially as you are moving toward the Advance that is coming up.

And those of the dark forces were aware of this Advance and did what they could to hold this off because they know that there are things that are afoot here, and are bringing big changes, not only here in this group, although this group is quite influential throughout the planet in many ways, in working together with the Forces of Light, in working together with the Alliance.

All of this is part of coming together as one. And those that are of the darkness very much fear this, and did what they could to both hold this off, but also to end it, if they could, and know though, that this one that we speak through now is very much protected. Even though he went through a great deal, he is very protected, just as all of you are.

We are ready for your questions if you have them.

Guest: I have a question, One Who Serves.

Guest: Speaking of protection and of protecting ourselves as well, there has been a lot of information that perhaps attacking of the Light Workers can be happening through our cell phones, and through our apps, and through our Facebook, and good things. Not in fear, but is it smart for us to be aware that maybe not log on as much, maybe cancel some of this applications that are connecting us to the Cloud, and the directed energy weapons? Thank you.

OWS: First of all, you must understand that technology is just that: it is technology, and it can have positive consciousness associated with it, or negative consciousness associated with it. So whatever your various techniques or devices are, and all of this, it is only what it appears to be to you. So if you are not concerned about it, then there is no reason to be concerned about it. Know that they are attempting to utilize the various technologies to hold back the ascension process. Again, we have said this many, many times: they are very much aware of the ascension and doing everything they can to hold it off, but they know that they cannot. So the various devices that you have, as long as you understand, and you believe that they are protected by the light and higher consciousness, then indeed that is what it will be so. Okay?

Guest: Okay, so there is no particular evil agenda happening right now with Zuckerberg, Facebook, and the Cloud to actually come through our phones and attack?

OWS: Oh my goodness, yes there is! But you need to understand that you are protected as well, if you believe that you are. You see, there are many across the planet that will not be protected from this because they know not about about it. So therefore they are prone to these various higher scale technologies that are coming into the planet. But know that as these technologies are introduced to the planet, and they are meant for the higher vibrational influences and consciousness of the planet, then that is how it will be determined here. Okay?

Guest: Thank you, One Who Serves. We love you!

OWS: Yes. Would there be other questions here? We cannot do this too long here as we find it, for this one is just quite weak yet, more so than he even discloses. But it is coming around. Yes. Are there any other questions?

Guest: Yes please. I have a concern because I have voluntarily subscribed to a scalar technology that I’m receiving daily. And my concern is with what was said, that it could possibly (___ inaudible) in pain, something negative. And I have been receiving these scalar (___ inaudible)…

OWS: You keep breaking up here on your device.

Guest: I’ll repeat. I have been receiving scalar treatments daily for about three to four months. So with the information that this could possibly be used in a negative manner, I do have some concerns about that. I’m also considering reaching out to the folks that are offering this scalar light treatment to talk to them about it as well. What say you? Thank you.

But know that there are various forces at work that are attempting to interfere with these types of technologies and can even do so, just as in this case with this one we speak through here, where this actually indeed did occur. Even though there was the presentation of this virus, this one would have made it through with not even an issue.

But those of the forces of darkness are aware of this group, again as we say, and leading to your next Advance, so they did everything they could to hold that off. For they knew that your next Advance is going to be quite profound, we will say at this point. Much is yet to be determined, but the timing is also correct here, as we find it. Okay?

OWS: Are there other questions here?

Guest: Yes, One Who Serves. Could you speak to us a little bit about the solar flash, the solar CME’s, the coronal mass ejection that has happened several times during the past week or so. What these energies are bringing to us, and how we can magnify the positive energy within that? Thank you.

Now, there is much that is being covered up by your sciences, and those that are seemingly, and we say here purposefully ‘seemingly’ in leadership, that they are doing what they can to keep you from knowing that these energies are coming in. Because they know this brings ascension. Okay?

Would there be any other question? We take one more if there is, but we must release channel here.

Very good. Then we are through for the time. And we apologize for any disconnect that appeared on this call here through our answers here as we bring this to you, but it is difficult for this one at this point to hold this connection here, and to feel like he is once again a part of his own body, connected to his own body. It is a difficult feeling to this one to go through. He can explain it further if he will.

Shanti. Peace be with you. Be the one.